Critical discourse has little patience with reduction. One of its most devastating charges levelled against theories, analyses, and descriptions is that of being reductive. Conceptual frameworks are dismissed for being impoverished, ontologies rejected for being too poor, descriptions for being too sparse or flat. And conversely, to call something ‘irreducible’ seems to confer an immediate and indisputable dignity to it. Yet the history of knowledge and in particular the history of science cannot be told without acknowledging the importance of reductionist paradigms, from Stoic physics or mechanistic materialism to cybernetics and structuralism. Any attempt to reject these paradigms has to contend with their ambiguous effects, such as their ability to generate radical innovations even when they are ultimately considered to have failed. Reductionisms indeed make the theoretical landscape more complex even as they seek to account for more with less and to achieve deeper understanding through unified theories.

What lies at the root of such different attitudes towards ‘reduction’ and how might their tensions be made productive? Reductionist and anti-reductionist positions are generally seen as polar opposites and often aligned with the alleged ‘two cultures’ — the natural sciences and the humanities, with the social sciences somewhere in between and internally split. Furthermore, ‘reduction’ has always had at least two distinct meanings: on the one hand, the vernacular sense of a quantity’s diminishment or a quality’s devalorization, and on the other hand the Latinate roots of ‘re-ducere’, bringing something back to something else, without necessarily implying a hierarchy in quantity, scale, or value. Yet, the notion of ‘reduction’ can also help dissolve rather than establish boundaries. Contracting its multiple dimensions and extending across virtually all fields of inquiry, reduction can indeed generate unexpected or errant resonances, interferences, and entanglements without losing its sense of direction, orientation, and analytical purchase.

The ICI Berlin’s new core project will explore the critical potentials of notions and practices of ‘reduction’ within and across different fields and approaches, from the sciences, technology, and the arts, to feminist, queer, and decolonial approaches, inquiring in particular into the transversality of different economies of reduction and the possibilities of escaping the seemingly unquestionable premium placed on production.

The significance of reduction is perhaps most evident in relation to complexity. Quite plausibly, nothing could be described, understood, or done without reducing complexity. While this insight deflates accusations of reductiveness and establishes a common ground across all fields, it also shifts attention to the ways in which reductions are performed: It can be done sparingly — taking complexity as a limited resource to be saved and economized — or liberally — treating complexity as a bounded, even conserved quantity that can be differently distributed. In the latter case, the relevant question is not how much one reduces, but which complexities one seeks to enhance at the price of which reductions, or which focus one sets and narrows in order to allow for greater complexity within it. While a trade-off between reduced complexity in some respects and increased complexity in others suggests a zero-sum game of reduction and complexity — or a competition over finite attention — reduction can also be reconciled with a logic of growth: division of labour not only increases overall production, but can also promise the emergence of new and greater complexities. Such is the premise of intersectional, trans- or multidisciplinary endeavours that combine different knowledge systems, each defined by its specific reduction, with the expectation that complexities not merely add up but multiply.

Yet the belief in unlimited growth, fuelled in the second half of the twentieth-century by a ‘new’, post-Newtonian science of complexity, emergence, and self-organization, may well be the product of a selective perception: the constructive interferences that are welcomed are generally balanced by destructive ones, and periods of catastrophic collapse are an integral part of self-organizing systems maximizing complexity. Furthermore, and alternatively or laterally to visions of accumulated reductions and emergent complexities, there remains in all fields of inquiry the guiding ideal of being clear and distinct, even simple. The sciences may be more deliberatively reductive in their theorizing and experimenting, but attempting to grasp the core of a phenomenon, issue, or question by stripping away all that is incidental and distracting, characterizes also the writing and modelling practices within the humanities, the arts, and design. While this resonates no doubt with ideas of efficiency and parsimony, even ascesis or austerity, techniques of concentration and condensation, intensification and subtraction also exceed economic considerations and constitute arts of knowing and forms of life.

The ancient technologies of the self, whose practitioners sought to rid themselves of the devastating effects of the passions, were compared by Plotinus to the work of the sculptor, regarded at the time as the paradigmatic art of reduction: while a painter proceeded through addition, a sculptor was thought to free an image from a block of marble through subtraction alone. Pierre Hadot has argued that Western philosophy was initially a ‘spiritual exercise’ aimed at transforming the self and its vision of the world. On his account, philosophy turned into a purely theoretical ‘handmaid of theology’ under the influence of medieval scholasticism, which deferred practices of the self to Christian mysticism and ethics. Medieval female mystics, in particular, intensified such practices and retained a strong bodily dimension in ways that would resonate through the centuries — from Catherine of Siena to Simone Weil — but techniques of the self also return in René Descartes’s ‘methodological solipsism’ and again in Edmund Husserl’s ‘eidetic’ and ‘transcendental reductions’. Even modern processes of mechanization seem to acquire a life of their own: The partial mechanization of the assembly line, for example, reduced complex manual labour to standardized bodily movements, which could then be translated into fully automated production processes and enable further technical evolutions. And reductive paradigms have periodically revitalized the arts, from neo-classicism to modernist design, from abstraction to minimalist investments or self-imposed arbitrary restrictions and aleatoric principles.

Federica Buongiorno
From Linearity to Modularity: A Phenomenological Study on Analog Patterns Within Contemporary Electronic Music Production and Fruition

Christopher Chamberlin
The Subject of Racism: Afterlives of Slavery in the Psychoanalytic Clinic

Amina ElHalawani
Vignettes of Homes in the Making: Towards a Theory of Home Between Practices and Affect

Özgün Eylül İşcen
The End of the World: The Limits of Cybernetics and Decolonial Thought

Ben Nichols
Living with Standards: Towards a Cultural History of Standardization

The Case for Reduction. ed. by Christoph F. E. Holzhey and Jakob Schillinger 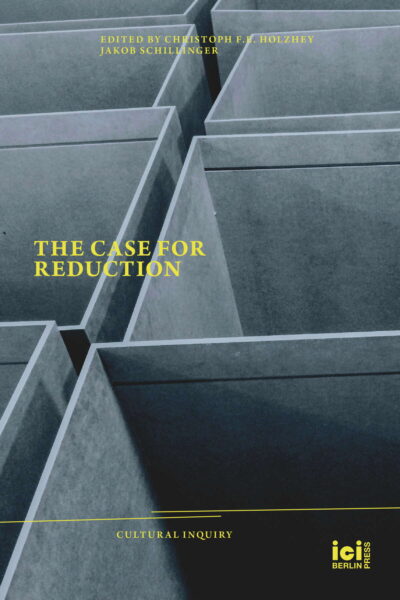