Conceptions of time and varied modes of temporal experience seem more at odds now than ever. Hamlet’s hunch – that ‘the time is out of joint’ – has turned into an evergreen of critical discourse. Admittedly, ideas of physical, social, revolutionary time, internal time consciousness, or historical experience are far from settled in their respective discourses and practices. Yet attempts to harmonize or correlate the understanding of time and temporal phenomena generated in different disciplines all-too quickly – and largely with violent effect – resort to normative, if not teleological ideas of progress, efficiency, narrative sense-making, or experiential plenitude.

The rich traditions of critical thinking about time that challenge such normative ideas can, however, appear complicit with the new temporal regimes of capitalism. For example, they are marked by the increase of flexitime in the workplace, celebrations of discontinued employment, even obsolescence as ‘reinventions of the self’. Additionally, the fact that the time of cyclical crises proper to capitalism has been rendered opaque by the proliferation of hedging and speculating on ‘futures’ or that high-frequency trade algorithms enable transactions at posthuman speeds. With acceleration having reached the point of evoking no longer progress but ideas of a ‘frenetic standstill’ (Virilio, Rosa) or the end of history, it would indeed seem that radical opposition to a particular temporal mode – such as linearly progressing time – is neither sufficient nor necessary, but, rather, risks proving counter-productive.

In this second instalment of the Core Project ERRANS, we ask whether the heterogeneous relations between discordant conceptions of time and temporality can be understood as being ‘erratically’ structured, that is, as marked by inherent misapprehensions, a dissonance that defies regulation, and an unexpected variability. For example, boredom or suspense challenges our confidence in the homogeneity of the flow of time; for Fanon, decolonial struggle creates a new human being, but can only do so by reworking the entire past from its very beginning; involuntary memory undermines the supposedly cumulative experience of time throughout a lifetime; Kristeva’s notion of ‘women’s time’ and queer temporalities reveal the (hetero)normative investments in the naturalized time of reproduction; psychotic experiences of homogeneous time unsettle our confidence that linear time is intelligible at all, as do the divergent modifications of Newtonian time by statistical, relativistic, and quantum mechanics; and the explosive potential of temporal standstill undoes the dynamist model for ‘revolution’ inherited from premodern theories of planetary motion.

The different temporal forms of erring provide a possible point of departure. Thus, Homer’s Odyssey juxtaposes its hero’s classical errantry – frequently seen as anticipating bourgeois, enlightened, or capitalist subjectivity – with the errant ruse of Penelope’s nocturnal unravelling of the burial shroud she is weaving during the day. These modes of erring also need to be considered as gendered, as one could argue for many temporal categories. Penelope’s gesture presents a paradigm for radical, that is, ‘wilful’ resistance to the narrative strongholds on temporal experience and, by extension, to the dictates of the exploitation of labour time that only intensified with the creation of inactive leisure or ‘down’ time. Penelope’s unravelling, hence, is akin to the radically negative temporalities experienced in melancholia, obsessive-compulsive disorders, lethargy, or traumatic rupture, ultimately raising the possibility of an ‘empty’ or even ‘dead’ time. Similarly, neither the time that can only be killed nor the time buckling before the deadline, neither the crawl of monotony or tedium nor the unlimited expandability of imminence can be discounted as mere limit cases or pathological experiences, but would have to be taken seriously as errant misalignments of irreconcilable aspects of time.

A radical discordance of Euro-American time becomes most blatantly manifest in what Johannes Fabian has termed ‘the schizogenic use of time’ by well-intentioned anthropologists: interacting with indigenous peoples in one time and writing about them in another, they perpetuate a systematic temporal relegation that in colonial regimes was based on assumptions about non-Western peoples living outside of time and needing to be brought up to date or ‘civilized’. These vast lingering temporal injustices, but also the most modest temporal complications of affective experience remain linked to the peculiar afterlife of history – past the closed gardens of salvation and redemption, past (post-)Hegelian mobilizations, past other narrative closures. Much recent work on the temporal structures and textures of the everyday – changing dramatically in a media culture going ‘live’ 24/7 –, the monotonous, boredom, but also the event, trauma, catastrophe, or end, draws its power from a confrontation with the frames of history, enlarged, crooked, manipulated, or broken as they may be.

Christiane Frey
The Time in Parenthesis:
Theo-Politics in the Baroque Mourning Play

Francesco Giusti
From Pre-diction to Post-diction:
The Prophetic Constitution of Subjectivity in Dante’s Vita nova

Clio Nicastro
Sensing the Other:
Empathic Temporality in Aby Warburg and Donna Haraway

Hannah Proctor
Healing through Explosion:
On the Temporal Paradoxes of Radical Psychiatry

Daniel Reeve
The Poetics of Circularity in Medieval Europe

Benjamin Lewis Robinson
States of Need – States of Emergency:
The Politics of Poverty in European Literature and Thought, 1789-1933

Foteini Vlachou
What Time for the Periphery?

Over and Over and
Over Again. Reenactment Strategies in Contemporary Arts and Theory. ed. by Cristina Baldacci, Clio Nicastro, and Arianna Sforzini


Critique of Journalistic Reason. Philosophy and the Time of the Newspaper. Tom Vandeputte


Middling Romanticism. Reading in the Gaps, from Kant to Ashbery. Zachary Sng


Re-. An Errant Glossary. ed. by Christoph F. E. Holzhey
and Arnd Wedemeyer 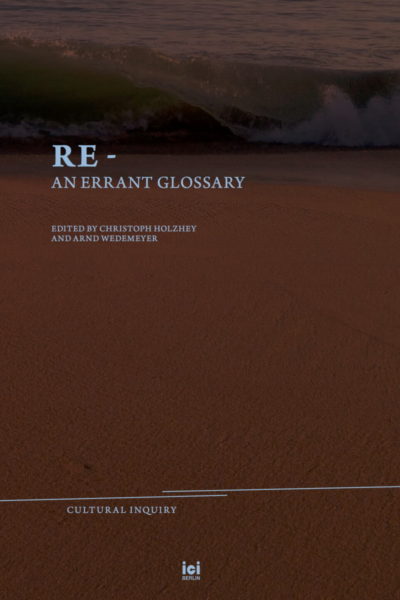