If what begins already finds itself in the thick of it, in the midst of something else, and among others elsewhere, what emerges, in the middle, at this mid-place or mi-lieu, does not thereby constitute a centre. Without starting or end point, origin or telos, this middle is deprived of any coordinates, frame, or foundation, of any measure with respect to them. Rigorously un-centred, such a beginning or emergence does not even have a well-defined position: it is diffuse, scattered, vague, blurred. This errant dimension of the milieu registers in the word ‘environment’: The French en-viron/en-virons (from Old French viron: ‘round, circle’) signifies both (as an adverb) a measure of imprecision or estimation and (as a noun, mostly in the plural) a surrounding region — an ambiguity repeated throughout different languages in the idiomatic uses of ‘circa’, ‘vicinity’, or ‘Umgebung’.

There is hardly a discipline, field, or discourse within the natural and social sciences nor the humanities that hasn’t long been touched and transformed by the notions of milieu, environment, or Umwelt. The recent revival and proliferation of ecological discourses can be understood, at least in part, as a response to the increasingly complete immersion in technologically in-formed environments. Yet, already the 19th-century revolutionary shifts in perspective occurred together with fundamentally new scientific methodologies, exactitudes, and quantifiabilities, which sought to contain their constitutive vagueness without ever managing to exhaust their originary errant dimension.

The transdisciplinary impact of these new concepts has not yet been captured, nor is it clear that it can be captured, but while the life sciences play a prominent role in them (having adopted, in the 19th century, concepts from physics and transgressed into the social sciences, for example, as racist discourses and social Darwinism), they don’t operate as the leading science in this transformation. Instead, this process appears to be a multidirectional, non-hierarchizable, and errant movement, itself constituting a complex ecology of knowledge.

ERRANS environ/s  contemplates aspects of this frequently divergent, potentially errant, and certainly ongoing transformation of not only the sciences or cultures of knowledge, but also cultural and artistic production at large. It will investigate the ways in which an attention to environments can have the effect of dissolving boundaries or making them permeable, questioning clear-cut distinctions, undermining naive ontologies, decentring the subject, folding nature and culture, and producing complex political ecologies attuned to far-reaching entanglements.

This reflection requires a careful analysis of the emergence of the concepts of environment, itself extraordinarily diffuse and complex: most crucially in the life sciences, but also in relation to, for example, classical field theory, epidemiology, the interlacing of media innovations, while also considering their premodern precursors, for example, the ancient Greek notions of klima and the periechon.

During its early history, the term ‘environment’ moved in tandem with the concept of ‘organism’ — both being related according to mutual influences, adaptations, and interactions. But by the time Georges Canguilhem writes his history of the term ‘milieu’, he could begin with the observation that the term had become a theoretical linchpin not just in the life sciences and was being ‘constituted as a category of contemporary thought’ in general. This astonishing career of environmental considerations occurred in conjunction with the rise of new conceptions of probability (Lorraine Daston) and modern statistics (Ian Hacking), altering the conception of scientific facts (Mary Poovey). The vagueness and vagaries of milieus seemed to call for a rescaling. Thus, for Adolphe Quetelet, given large enough numbers, the actions and reactions of the homme moyen in his milieu could be predicted with the precision of a ‘social physics’. There have been many attempts to find in theories of the environment a vindication of strong holistic assumptions, new, system-theoretical totalizations, or cybernetic closures. This inherent drift to the vast scale also marks recent promotions of the Gaïa hypothesis, the posthumanist idea of an ‘Anthropocene’, or of a series of other terms that are less prone to an unwitting solidification of human exceptionalism, such as the Capitalocene, or, Donna Haraway’s favourite, the Cthulucene.

Perhaps even more problematic is a provincializing tendency of environmental concerns, which runs the risk of naturalizing social roles and political conflicts. It can be seen in efforts to safeguard strictly local environments homeostatically by implementing an inherently conservative principle of ‘sustainability’ – frequently at the expense of also taking into consideration privilege and injustice in their transnational and neo-colonial extensions. Here, too, it is important to release a radically open and hence errant dimension of environmental considerations that acknowledges the instabilities, fluidities, and dynamic potentials of fundamental categories (race, sex, gender, species) constitutively bound to today’s arguably unsustainable injustices. This is not to say that all is related and has an environment, and it remains equally important to address another limit of the environment: infused with an errant environ-ness, the very notion of environment as dynamic potential is also premised upon relationality and as such is called into question by the non-related, the non-human, or blackness as theorized by Saidiya Hartman, Frank B. Wilderson, and many others.

The relation between the fascination with environments and a dissolution of form is perhaps nowhere as apparent as in the realm of aesthetics. In the abolition of contour in the painting of Turner, Cézanne, or the Impressionists, for example; in the obsession with vapours and radiations, the aura or the ethereal in Symbolist poetry; in the elevation of the notion of ‘environment’ to an art form itself; in the intricate questioning of environment and embodiment in the works of Louise Bourgeois, Nakaya Fujiko, Mona Hatoum, and Ana Mendieta. These correspondences emerge, somewhat paradoxically, in Gaston Bachelard’s reflections on the role of the ancient elements in works of the imagination. They have also generated a vast speculative philosophy in the work of Michel Serres — who, incidentally, rejects the notion of ‘environment’ altogether.

Delfina Cabrera
The Unwriting Machine: Medio and the Archive in Mario Bellatin

Nicolò Crisafi
Possibility and the Utopian Imagination in the Poetic Practice of Dante, Petrarch, and Boccaccio

Daniel Liu
The (Un-)Bounded Elementary Organism: Visions of the Continuity of Life in the 'Dark Age' of Physical Chemistry

Damiano Sacco
Residues of Presence: Between Physics and Metaphysics

M. Ty
When History Merges into Setting: Walter Benjamin and the Decreation of Human Sovereignty

Facundo Vega
Principles of An-archy: Hannah Arendt, Reiner Schürmann, and the Politics of the Many 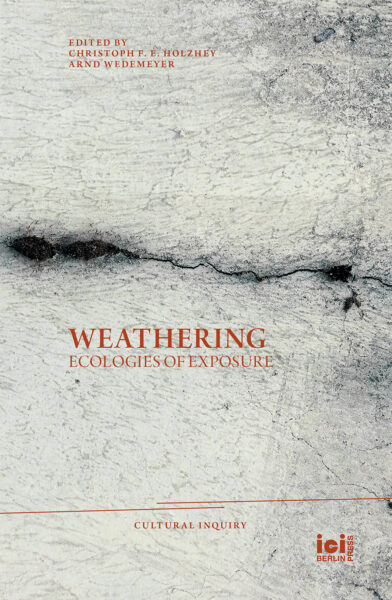